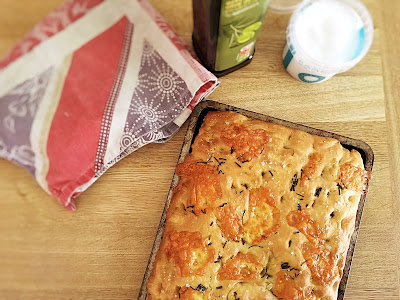 Place the flour into a large bowl and rub in the yeast with your fingertips.
Add the salt, chives, oil and water and combine until the mixture forms a dough (adding more water if it feels a little dry).
Tip the dough out onto a lightly oiled surface and knead for around 5 minutes, or until it becomes smooth and more elastic.
Place the dough back into the bowl, cover it with a tea towel, and leave to rise for at least an hour, or until it has doubled in size.
Grease a medium rectangle baking tray (around 20cm x30 cm) with a little olive oil.
When the dough has risen, decant it into the baking tray, pushing it down with your hands as you go, so that it fills the whole tin.
Cover the dough again with a tea towel, and leave to rise for around 30 minutes, or until it has noticeably puffed up.
Pre-heat the oven to 200 degrees c.
When the dough has risen, press down into the surface with your knuckles, to make little indents.
Sprinkle over the cheese, remaining chives and sea salt.
Drizzle over the olive oil and then bake the focaccia for about 20 minutes, or until it's crust has turned a deep golden brown.
Leave the loaf to cool in the tin slightly, before removing and serving.
This loaf is best eaten on the day that it has been made.