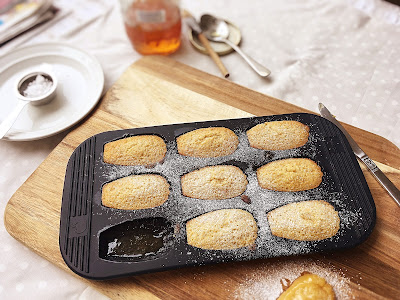 For the Filling:
2 tablespoons marmalade 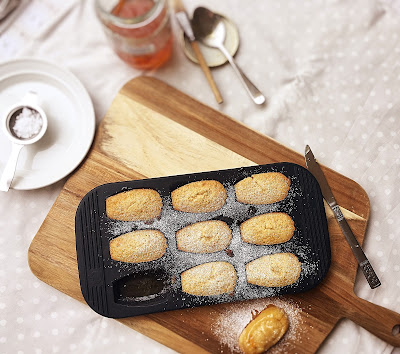 Melt the butter, then leave it to one side to cool slightly.
Place the eggs and the sugar into the bowl of a large free-standing mixer (or you could use a hand-held electric whisk) and whisk for around 5 minutes, or until they are pale and fluffy.
Mix together the milk and marmalade with the slightly cooled butter.
Pour the buttery marmalade into the eggs and sugar, and whisk again until everything is well combined.
Take the bowl off the mixer, and carefully fold in the flour, baking powder and orange zest.
Cover the bowl with clingfilm and place into the fridge to chill, for about an hour.
Place the remaining marmalade into a disposable piping bag, and cut a medium sized hole into the end.
Grease a couple of Madeleine tins with a little butter.
Pre-heat the oven to 180 degrees c.
When the batter has chilled, take it out of the fridge and place a heaped tablespoon into each shell in your Madeleine tins (you don’t want to fill them all the way to the top).
Place the cut end of the piping bag into the middle of each batter shell and pipe for a couple of seconds, or until a pool of marmalade appears on the surface.
Place the Madeleines into the oven and bake for 5 minutes, before turning the temperature down to 160 and baking for a further 5 minutes, or until the madeleines have turned a light golden brown, and have a slight peak on top.
Leave the Madeleines to cool slightly in the tins, before dusting with icing sugar and serving.
Posted by Unknown at 22:20