I love the zesty freshness of Lady Grey tea and I think it's a flavour combination that works especially well in hot cross buns. I was going to infuse my milk with the tea, which is the usual way of getting lots of flavour into bakes like this, but my Mum suggested soaking the fruits, as you would for a Christmas cake, and after trying it I think it worked really well. The fruits not only carry the flavour, but really plump up, injecting a lovely moisture and softness into the buns.
Because the fruit is quite wet, I would suggest adding half of the milk first, then give everything a mix, and if it feels a little dry still you can always add some more. 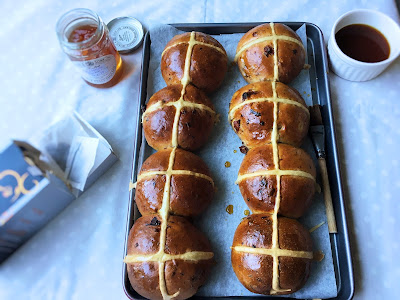 For the glaze:
2 tablespoons marmalade
Left over tea from soaking the fruit. 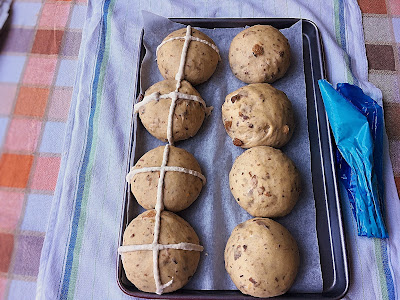 Place the tea bags into a large heat proof bowl.
Place the dried fruit on top on the tea bags and the pour over enough boiling water to cover everything.
Cover the bowl with a tea towel and then leave the fruits to soak for at least 4 hours, or ideally overnight.


When the fruit has been soaking for enough time, place the flour into a large bowl and rub in the butter with your fingertips, until the mixture resembles fine bread crumbs.
Rub the yeast into the flour and butter mixture.
Drain the fruit, discarding the tea bags but keeping any tea that's left behind.
Add the fruit to the flour along with the lemon zest, mixed spice, salt and milk and combine until the mixture forms a dough (adding more milk if it feels a little dry).
Tip the dough out onto a lightly floured surface and knead for around 5 minutes, until it feels soft but not sticky.
Return the dough to the bowl, cover with a tea towel, and leave to rise for around an hour and a half, or until it has doubled in size.
When the dough has risen, place it onto a lightly floured surface and roll it into a large sausage shape.
Cut the doughy sausage into 8 equal pieces.
Roll each of the pieces into a ball and then place onto a baking tray lined with grease-proof paper (making sure to leave a good gap between each one).
Cover the baking tray with a tea towel and leave the buns to rise for about an hour, or until they have noticeably puffed up.


Pre-heat the oven to 180 degrees c.
Start making the glaze by placing the left over tea and marmalade into a pan over a high heat.
Stir the mixture regularly, until it the marmalade has dissolved and it starts to bubble.
When the tea starts to bubble, turn it down to a very low heat and leave it to reduce down until you are ready to use it.
Make the paste for the cross by mixing together the plain flour and water. You want it to have a soft consistency (as you need to pipe it), but not be too runny, as it won’t hold its shape.
Place the paste into a disposable piping bag and cut a small hole in the end.
When the buns have risen, pipe a cross onto each one using the paste.
Bake the hot cross buns for around 20 minutes, or until their crusts have turned a very dark golden brown.
When the buns have come out of the oven, brush over the tea glaze and then leave to cool completely on a wire rack before serving.
These hot cross buns will last for a couple of days, wrapped up well and stored in a cool dark place (not the fridge).