What's better than a hot cross bun? A hot cross bun loaf of course! Serve this soft, spicy bread toasted, with lots and lots of butter. 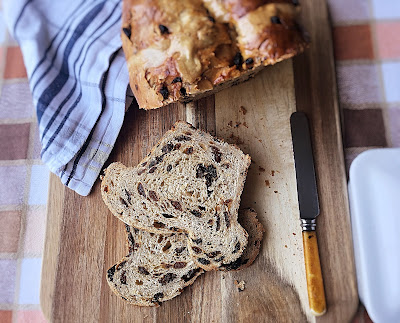 
Place the flour into a large bowl and rub in the butter with your fingertips, until the mixture resembles fine bread crumbs.
Rub the yeast into the flour and butter mixture.

Add the dried fruits to the flour along with the lemon zest, mixed spice, salt and milk and combine until the mixture forms a dough (adding more milk if it feels a little dry).
Tip the dough out onto a lightly floured surface and knead for around 5 minutes, until it feels soft but not sticky.


Return the dough to the bowl, cover with a tea towel, and leave to rise for around an hour and a half, or until it has doubled in size.
Grease a 2lb loaf with a little softened butter.
When the dough has risen, place it onto a lightly floured surface and shape it into an oblong, just a little smaller than your loaf tin.
Place the oblong into the prepared tin, cover it with a tea towel and leave to rise again for around an hour, or until it has puffed up and is now peaking out over the rim of the tin.
Pre-heat the oven to 180 degrees c.

Make the paste for the cross by mixing together the plain flour and water. You want it to have a soft consistency (as you need to pipe it), but not be too runny, as it won’t hold its shape.
Place the paste into a disposable piping bag and cut a small hole in the end.
When the loaf has risen, pipe a cross shape over the surface using the paste.
Bake the loaf for around 40 minutes, or until the crust has turned a very deep golden brown.
Make the glaze by mixing together the marmalade and boiling water, until all the marmalade has dissolved.
When the loaf has come out of the oven, brush over the glaze and then leave to cool completely in the tin, before slicing and serving.
This loaf will keep for a few days, wrapped up well and stored in a cool, dark place (not the fridge).
Posted by Unknown at 13:06