I got the inspiration for this bake from my friend Jonny, who once made me some flatbread that was stuffed with either sweet potato or butternut squash (I can't remember which one), and it tasted AMAZING. Ever since I tried his creation I have been thinking of ways that I could combine the delicious, earthy flavour into my own breads. I have always been a fan of potato topped focaccia (Jamie Oliver does a good one) and I thought a little twist on the classic Italian flatbread would be the perfect carrier for my spiced sweet potato mixture. 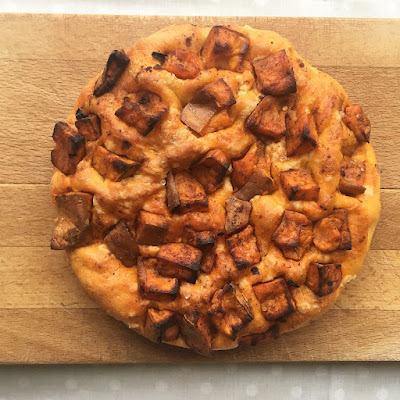 
Place the flour into a large bowl and rub in the yeast with your fingertips.
Add the salt oil and water and combine until the mixture forms a dough (adding more water if it feels a little dry).
Place the dough onto a lightly oiled surface and knead for around 5 minutes, or until it feels more smooth and elastic.
Return the dough to the bowl, cover with a tea towel and leave to rise for around an hour, or until it has doubled in size.
Pre-heat the oven to 180 degrees c.
Place the chopped sweet potato onto a baking tray.
Sprinkle over the paprika, chilli flakes, 1 tablespoon of the olive oil and 1 tablespoon of the sea salt and mix together so that the sweet potato is evenly coated.
Bake the seasoned potatoes in the oven for around 20 minutes, or until they are soft.
When the sweet potatoes are ready, remove them from the oven and place to one side to cool.
Grease two 20cm round cake tins with olive oil.
When the dough has risen, divide it into two and place it into the lined cake tins.
Press the cooled sweet potato into the doughs and then cover each one with a tea towel.
Leave the doughs to rise for around 30 minutes, or until they have noticeably puffed up.
Pre-heat the oven to 200 degrees c.
When the loaves have risen, sprinkle over the remaining olive oil and sea salt and bake for 20 minutes, or until they have turned a deep golden brown.
Leave the focaccia to cool slightly on a wire rack before removing from the tins and serving.
The focaccia can be frozen, if you are not planning to eat them straight away (this is why I made two, so I could eat one now and freeze the other for later), simply cool completely and then wrap well in clingfilm before freezing. When you are ready to eat the focaccia simply bake them straight from frozen, at 180 degrees for 10 minutes.