After the success of my last marmite themed bake I thought I would try something else, this time including it in a delicious Mediterranean classic and adding a little extra cheese (because cheese  makes everything better). I may have offended some Italians by calling this a 'focaccia' but it its baked in the same way and drenched with olive oil, all that's missing is an adornment of sea salt (I figured the marmite was salty enough). Enjoy this bread whilst its still slightly warm, dunked into some piping hot soup. 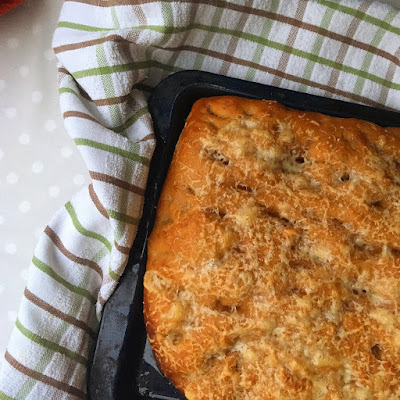 Place the flour into a large bowl and rub in the yeast.
Add the marmite, salt, oil, parmesan and water and mix to form a dough (adding more water if it feels a little dry).
Place the dough onto a floured surface and knead for around 10 minutes, or until it feels smooth and elastic.
Return the dough to the bowl, cover with a tea-towel and leave to rise for about an hour, or until it has doubled in size.
Grease a rectangle baking tray and pre-heat the oven to 200 degrees C.
When the dough has risen, place it in the baking tray, stretching it out so that it pretty much fills the entire tin.
Cover with a tea-towel and leave to rise again, for around 20 minutes, or until the dough has noticeably puffed up.
When the focaccia has risen, make lots of dents in the surface with your knuckles, then sprinkle over the cheese and olive oil.
Bake for around 20 minutes, or until the cheese is burnished and the crust is a deep golden colour.
Cool the focaccia in the tin, for around 10 minutes, before removing and serving.
Posted by Unknown at 09:14