These sweet, coconut-y rolls are essentially a Bounty chocolate bar served up in bread form. Enjoy as part of a treat filled weekend breakfast or simply as a naughty afternoon pick me up. 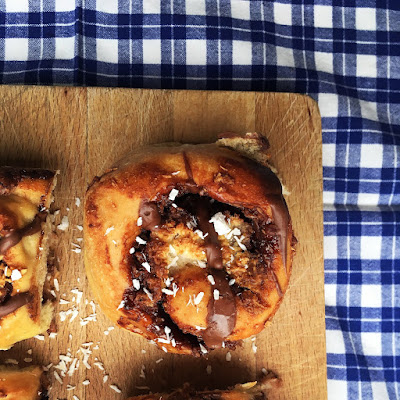 For the topping:
1 tablespoon chocolate spread

Place the flour into a large bowl and rub in the butter using your fingertips, until the mixture resembles fine bread crumbs.
Rub the yeast into the bread crumb mixture.
Add the salt and milk and combine until the mixture forms a dough (adding more milk if it feels a little dry).
Place the dough onto a lightly floured surface and knead for around 10 minutes, or until it feels soft but not sticky.
Place the dough back into the bowl, cover with a tea towel and leave to rise for about an hour and a half, or until it has doubled in size.
Make the filling by mixing together the condensed milk, icing sugar and desiccated coconut.
When the dough has doubled in size, tip it out onto a lightly floured surface.
Roll the dough out into a large rectangle (around 20cm x 30cm) and then spread over the chocolate spread and then the coconut mixture.
Roll the dough up into a large sausage and then cut it into 15 equal pieces.
Line a rectangle baking tray with some grease proof paper, and then place the dough pieces on it, leaving 2 cm (ish) gap between each one.
Cover the buns with a tea-towel and leave to rise for about an hour, or until they have noticeably puffed up.
Pre-heat the oven to 180 degrees c.
When the buns have risen, bake them for around 20 minutes, or until they have turned a deep golden brown.
Leave the buns to cool completely in the tin before drizzling with the remaining chocolate spread and serving.
Posted by Unknown at 14:12