I got the inspiration for this bake whilst having breakfast at a quiet bakery in Covent Garden. They were serving these orange chelsea buns, which were deliciously sticky and sweet, and once I tasted one, I knew I was going to have to try and make my own version at home.
I have added mixed spice to my buns, because I like the warmth that it brings on a cold autumn day. Enjoy these treats with a large cup of tea, as a late afternoon pick-me-up. 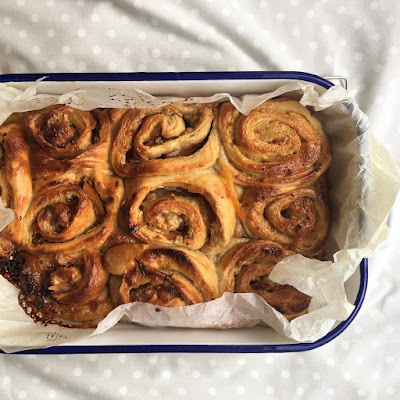 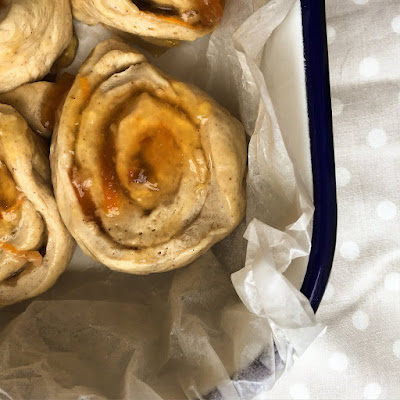 Place the flour into a large bowl and rub in the butter using your fingertips, until the mixture resembles fine bread crumbs.
Rub the yeast into the bread crumb mixture.
Add the salt, mixed spice and milk and combine until the mixture forms a dough (adding more milk if it feels a little dry).
Place the dough onto a lightly floured surface and knead for around 10 minutes, or until it feels soft but not sticky.
Place the dough back into the bowl, cover with a tea towel and leave to rise for about an hour and a half, or until it has doubled in size.
Whilst the dough is rising, make a creme patisserie for the filling.
Place the yolks and sugar into a large bowl and whisk together until pale.
Add the flour and orange zest into the egg mixture, stirring until there are no lumps.
Heat the milk and vanilla, in a pan over a medium heat, until it just starts to boil.
Take the pan off the heat and pour half of the milk into the egg mixture, stirring well until it is fully combined.
Stir the rest of the milk into the egg mixture and then place it all back in the pan.
Put the pan back on the heat, and stir until the mixture goes thick and gloopy (you may have to whisk it a little if lumps start forming).
When the mixture has thickened, place it into a large bowl and cover with clingfilm (making sure that the cling film directly touches the creme patisserie, to avoid a skin forming), then leave to cool completely.
When the dough has doubled in size, tip it out onto a lightly floured surface.
Roll the dough out into a large rectangle, and then spread the cooled creme patisserie and marmalade across it.
Roll the dough up into a large sausage and then cut it into 10 equal pieces.
Line a rectangle baking tray with some grease proof paper, and then place the dough pieces on it, leaving 2 cm (ish) gap between each one.
Cover the buns with a tea-towel and leave to rise for about an hour, or until they have noticeably puffed up.
Pre-heat the oven to 180 degrees c.
Make the glaze by mixing together the marmalade and the boiling water.
When the buns have risen, bake them for around 20 minutes, or until they have turned a deep golden brown.
When the buns are ready, brush over the marmalade glaze and leave them to cool in the baking tray, before serving.