I have seen 'porridge bread' popping up everywhere in the last few weeks. From artisan bakeries to food bloggers, everyone seems to be putting this breakfast staple into their loaves, and as I love combining oats into my bakes, I thought I would jump on the bandwagon and give it a go. During my first attempt at coming up with a recipe for this new trend, I added wayyy too much porridge, making the dough very hard to handle, and the texture of the finished loaf very dense. This version uses a little less porridge than my previous endeavours, but still manages to keep that creamy oaty texture. I have made two medium loaves here, but you could combine them and just make one very large bake, if you wanted. 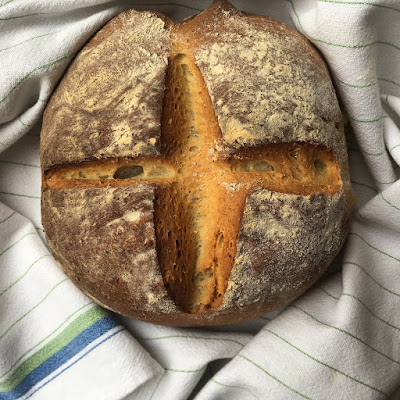 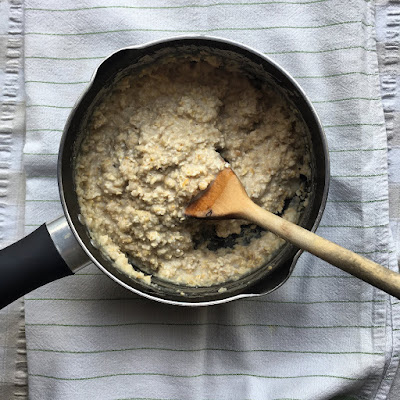 Make the porridge by heating the oats and water in a pan on a medium heat, stirring until all the water has absorbed and the oats have gone all creamy.
Take the porridge off the heat and leave to cool completely.
Once the porridge has cooled, make the loaf by placing the flour into a large bowl and then rub in the yeast.
Add the porridge, salt, oil and water and mix until it forms a dough (adding more water if it feels a little dry).
Tip the dough onto a lightly floured surface and knead for around 10 minutes, or until the dough feels smooth and more elastic.
Return the dough to the bowl and cover with a tea towel.
Leave the dough to rise for about an hour, or until it has doubled in size.
When the dough has risen, divide it into two equal pieces and roll each piece into a ball.
Place the balls onto a lined baking tray (leaving plenty or room between each one) and cover with a tea towel.
Leave the loaves to rise for about an hour, or until they have noticeable puffed up.
Pre-heat the oven to 200 degrees c.
When the loaves have risen, dust them with a little flour and make some slashes in the top with a sharp knife.
Bake the loaves for around 25 minutes, or until their crusts are a deep golden brown and the bottom of each one sounds hollow when tapped.
Cool completely on a wire rack before slicing and serving.