My first memory of the beloved teacake is greedily chomping on one during a break time at school (you used to be able to buy them at a little tuck-shop they ran in the P.E corridor). They were absolutely huge things (or at least they felt like that to tiny hands), often tasted a little stale and were always dripping with butter.  I created this recipe in honour of those school day treats, however these ones are slightly more refined and not in the least bit stale-tasting.  I have used spelt flour and honey  in this bake, for added flavour and sweetness. You could add 200g of currants if you wanted, after the first rise, for something a little fruiter. 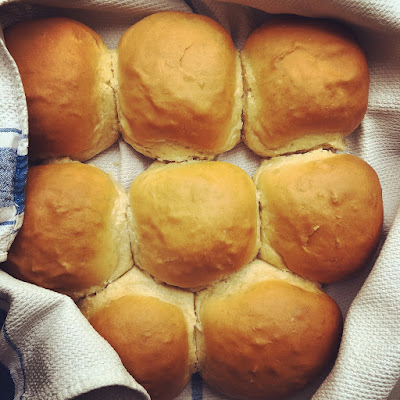 
Place the flour into a large bowl and rub in the butter with your fingertips, until the mixture resembles fine breadcrumbs.
Rub the yeast into the flour and butter.
Add the salt, honey and milk and mix until it forms a dough (adding more milk if it feels a little dry).
Place the dough onto a lightly floured surface and knead for around 10 minutes, or until the dough feels soft but not sticky.
Return the dough to the bowl, cover with a tea towel and leave to rise for about an hour and a half, or until it has doubled in size.
When the dough has risen, divide it into 8 equal pieces and then roll each piece into a ball.
Place the balls onto a lined baking tray, leaving an inch gap between each one, and cover with a tea towel.
Leave the balls to rise for around 30 minutes, or until they have noticeably puffed up and are almost touching.
Pre-heat the oven to 180 degrees c.
When the teacakes have risen, bake them for around 15 minutes, or until they have turned a light golden brown.
When the teacakes are out of the oven, leave them on the baking tray and brush them with a little melted/softened butter and cover them with a tea towel until they have cooled (this will help keep them soft).
These teacakes taste best on the day they are made, but will keep well for a couple of days in a re-sealable food bag.
Best served toasted with lots of butter.
Posted by Unknown at 16:37