I have to say this loaf was absolutely delicious. I upped the amount of herbs I would normally use to make sure that this bake was jam packed full of flavour. Once again I have added my onions and herbs at the beginning, rather than after the first rise, to ensure a more even distribution. Serve this focaccia alongside pasta (for a carb fest) or a with delicious summer salad. 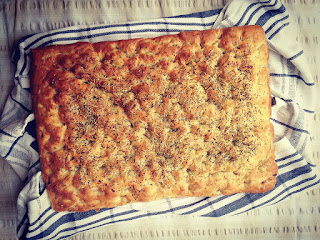 Heat a little olive oil in a pan and cook the onion and the herbs, on a medium heat, for about 10 minutes (or until the onion has softened).
Leave the onion mixture to cool.
Place the flour into a large bowl and rub in the yeast.
Add the salt, water, oil and onions and mix to form a dough (adding more water if it feels a little dry).
Tip the dough onto a lightly oiled surface and knead for around 10 minutes, or until the dough feels smooth and elastic.
Return the dough to the bowl and cover with a tea towel.
Leave the dough to rise for at least an hour, or until it has doubled in size.
Lightly oil a medium rectangle baking tray.
When the dough has risen, place it into the baking tray, lightly stretching it so it pretty much fills the tray.
Cover the tray with a tea towel and leave to rise for about half an hour, or until the dough has puffed up.
Pre-heat the oven to 200 degrees c.
When the dough is ready, make indents in the surface with your knuckles and sprinkle over the herbs, salt and oil.
Bake for around 25 minutes, or until the loaf turns a deep golden brown colour.
Let the focaccia cool slightly in the tin before removing and serving.