My brother was complaining that non of the loaves I was making him were 'toaster size', so I decided that trying a bloomer shaped bread might solve this problem (he had already said he didn't want a tin loaf). Spelt is an ancient grain and it has been used as far back as the Romans. A sort of cousin to the wheat flour we are used to, spelt is known for it's mild nutty flavour, and it makes really great bread for toasting (some people also find it easier to digest than wheat flour).
I have adjusted the water content in this recipe, as I found my loaf was a little too wet and didn't hold it shape when proved. I have added a little of my sourdough starter in this recipe, just straight from the fridge, for a little extra flavour (but just leave it out if you don't have one). 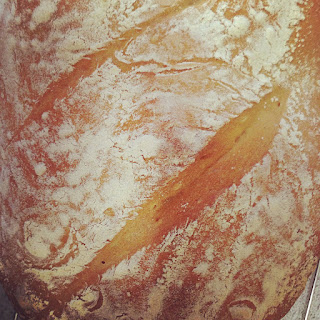 Place the flour into a bowl and rub in the yeast.
Add the salt, oil, sourdough starter (if using) and water and mix to form a dough (adding more water if it feels a little dry.
Place the dough onto a lightly floured surface and knead for around 5 minutes, until the dough is smooth.
Return the dough to the bowl, cover with a tea-towel and leave to rise for about an hour, or until it has doubled in size.
When the dough is ready, shape into a bloomer (a rectangle with rounded ends) and place onto a lined baking tray.
Cover again with a tea-towel and leave for about 30 minutes, or until it has noticeably puffed up.
Pre-heat the oven to 200 degrees c.
When the dough has risen, sprinkle the top with a little spelt flour and make around 4 slashes with a sharp knife.
Bake for 25 minutes, or until the bottom of the loaf sounds hollow when tapped.
Cool on a wire rack before serving.
Posted by Unknown at 18:22