The marmalade glaze adds a citrusy twist to this otherwise classic recipe. Serve warm with lots of butter (or if you are like me, peanut butter). 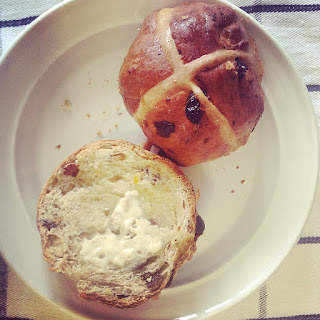 Place the flour into a large bowl and rub in the butter, until the mixture resembles corse bread crumbs.
Rub in the yeast and then add the salt, sultanas, mixed peel, mixed spice, egg and milk and mix to form a dough (adding more milk if it feels a little dry).
Place the dough onto a lightly floured surface and knead for about 10 minutes, or until it feels soft but not sticky.
Return the dough to the bowl and cover with a tea-towel.
Leave the dough to rise for about an hour and a half, or until the mixture has doubled in size.
When the dough has risen, cut it into 8 equal peices and roll each one into a ball shape.
Place the balls on a lined baking tray, with a small gap between each one.
Cover the buns with a tea-towel and leave to rise for about half an hour, or until the balls have puffed up and are almost touching.
Pre-heat the oven to 180 degrees c.
Make the cross by mixing the flour and water together. You are looking for the mixture to be pipe-able, but not too runny. Place the mixture into a piping bag.
When the buns are risen, pipe a cross onto the top of each one.
Bake the buns for around 20 minutes, or until they are a nice dark brown colour on top.
Make the glaze by mixing the boiling water and marmalade together. Brush it on top whilst the buns are still warm.
Cool a little on a wire rack before serving.