I shouldn't really call these 'naan breads', as they aren't cooked in a specially made brick oven, but I can't say that I've got one of those to hand at home, so I dry fried them in a non-stick pan instead. The herbs and spices I've incorporated into my dough really bring a traditional and familiar flavour. If you wanted to be a little more daring, add more chilli or some garlic oil. 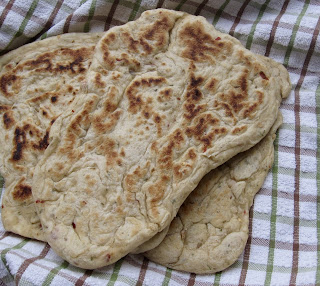 Add the flour to the bowl and rub in the yeast.
Add the salt, oil, spices and water and mix to form a dough (adding more water if it feels a little dry).
Place the dough onto a lightly oiled surface and and knead for around 10 minutes, or until it feels smooth and elastic.
Return the dough to the bowl, cover with a tea-towel and leave to rise for about an hour, or until it has doubled in size.
When the dough is ready, split it into 3 equal pieces and stretch each one into a naan shape using your hand.
Put a non-stick frying pan onto a high heat (without any oil) and cook each naan for around 3 minutes on each side, or until it looks golden and slightly burnished.
Serve the naans whilst still a little warm.

Tip- you can make the naan breads in advance and re-heat in the oven when you are ready to use. Simply pre-heat the oven to 200 degrees c, and place the naan straight onto the oven racks to cook for around 3 minutes.