Easter may still be a little while off yet, but I always like to get in early when experimenting with new ideas, so that I have plenty of time to perfect them! I am so glad the spelt works within such a traditional recipe, the nuttiness really adds another dimension to the flavour and texture. Spelt doesn't contain as much gluten as strong wheat flour, so it doesn't require as long a kneading time. You also might find that the dough doesn't rise as much as with wheat flour, but don't worry it will be just as tasty. 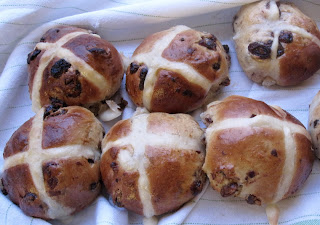 Place the flour into the bowl and rub in the yeast.
Add the rest of the ingredients and mix to form a dough (adding more milk if it feels a little dry).
Place the dough onto a floured surface and knead for around 5 minutes, or until it feels soft and smooth.
Return to the bowl and cover with some clingfilm.
Leave the dough to rise, for a good couple of hours, or until it has doubled in size.
When the dough has risen, divide it into 8 equal portions and shape each portion into a ball.
Place the balls on a lined baking tray (making sure they are a good few inches apart) and cover with a tea-towel.
Leave the buns to rise for around 30 mintes, or until they have noticably puffed up.
Pre-heat the oven to 180 degrees C.
Mix the spelt flour with the water, to form a thick paste, and then spoon into a pipping bag.
When the buns have risen, pipe a cross shape on the top of each one with the paste mixture.
Bake for around 15minutes, or until the buns have turned a nice golden brown colour.
Mix the apricot jam with the boiling water and brush it on the hot cross buns as soon as they come out of the oven.
Transfer the buns to a wire rack. Leave to cool before serving.