Replacing the creamy milk usually found in traditional stollen with beer will give the loaf a delicious adult taste. Using the beer cold straight from the fridge will make the bread take a little longer to rise, which means you will get extra flavour. I used sour cherries in this mixture but feel free to swap for mixed peel if you want a sweeter taste. 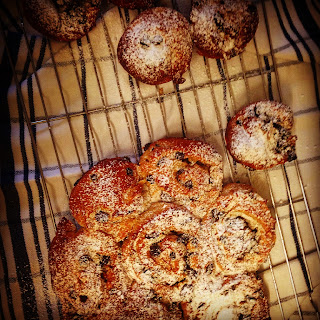 Add the shots of brandy to the fruit and leave to soak.
Rub the yeast into the flour and then add the salt to the opposite side of the bowl.
Add in the butter, egg, mixed spice, lemon zest, sugar, beer and half the fruit and mix to form a smooth dough (adding more beer if you need it).
Knead the dough for around 10 minutes until it's smooth and elastic. Cover and leave until it doubles in size (this could take up to two hours).
When the dough is ready roll it into a large rectangle (around 20cm wide and 30cm long).
Roll the marzipan out to around the same size and place it ontop of the dough.
Add the rest of the fruit along with the flaked almonds.
Roll the dough into a long sausage shape and cut into 1 inch discs.
Grease two 20inch loose bottomed sandwich tins with olive oil and lay the rounds of dough into them, leaving a slight gap between each one.
Cover the tins and leave to rise again until the dough has puffed up a little. This should take around an hour.
Pre- heat the oven to 180 degrees C.
When the dough is ready, bake for 20 minutes or until the stollen go a nice golden colour.
As soon as you take the loaves out of the oven dredge with a layer of icing sugar straight away, then leave the loaves to cool out of the tins.
When the stollen are cool add a second layer of icing sugar and serve.


Tip: You could also use a muffin tin to bake individual stollen buns. Just grease a regular muffin tin and add the rounds to the holes.
Posted by Unknown at 13:28