My mum recently bought me 'Good Things in England', a re print of an old fashioned cook book by Florence White containing a wide collection of recipes that were written between 1399 and 1932. It's such a fascinating book, especially if you are interested in how we used to cook and eat. Most of the older recipes contained ingredients I had never even heard of or had any desire to cook with (Calf's Head Soup, no thank you).
Being obsessed with bread I jumped right to that chapter, and having been craving toasted tea cakes for a while, I decided to go with Currant Tea Cakes.
I have to say, even though the ingredients were in pounds and ounces, the recipe wasn't that different from ones produced today. To make the tea cakes I used 1lb of flour, 1 teaspoon of salt, 2 oz butter (the recipe suggested lard but I used butter as I don't eat meat), 1/2 pint milk, 2 teaspoons sugar, 2 teaspoons of yeast (I just used a 7g sachet). I rubbed the flour, butter and salt together and then added the milk yeast and sugar. I mixed in about 100g of currants, kneaded and then left to rise for about an hour. I then shaped into eight tea cakes, left to rise for another fifteen minutes and the baked in a medium oven for about fifteen to twenty minutes. The book suggested that, when they had come out of the oven, you should rub them with butter and place under a tea towel to keep them soft. I found this really worked and my tea cakes stayed soft for a few days in the bread bin. 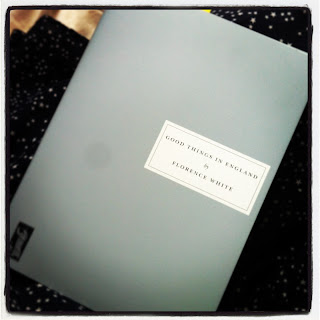 I am obsessed with spelt flour, and use it in most of my baking. It's an ancient cousin of wheat and I tend to use it a lot because some people find it easier to digest than its relative. To go with a dinner of homemade pasta I made some toasted bread (yes carb overload) by cutting my spelt loaf into slices the topping with a little olive oil, sea salt and rosemary and then toasting under the grill. I find that this is a really tasty way to use up any left over bread you might have. It was lovely dipped into the pasta sauce. 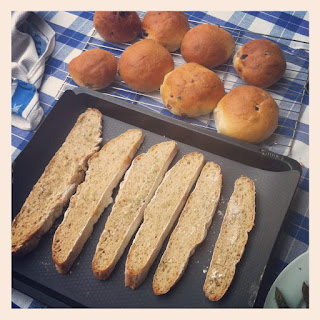 I am always in need of something to take to work for my morning break. I was eating bananas, but after consuming what felt like 10,000 of them, I wanted something new. I decided a breakfast bar would be a good healthy (ish) alternative to fruit and I found that Nigella had a recipe in her 'Nigella Express' cookbook. I tweaked some of the ingredients she used to go with what I had in the cupboards at home (adding dried bananas and substituting raisins for cranberries). My good friend Sophie had also recently given me some of her delicious homemade vanilla essence, so I decided to put that in too to really add to the flavour.
I made them by melting 250g of butter with 150g of golden syrup and about 50g of maple syrup. I then added 250 of oats, 75g of shredded coconut, 100g of raisins, 100g poppy seeds, 50g of dried bananas, 100g peanuts and mixed them together and pressed them into a tin. I baked them at 130 degrees for about 45 minutes. 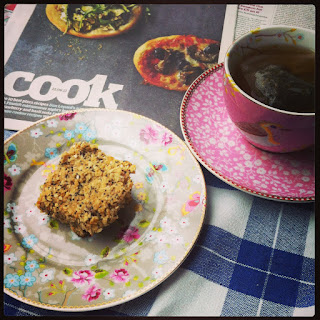 My next door neighbour had organised a charity event and asked if I would make a 'spectacular' cake that they could auction off. My cake decorating has never been amazing so when people use the word 'spectacular' it always worries me. Using seasonal fresh fruit is always an easy yet effective way to make a cake look good, but as I wasn't sure about how the cake was going to be stored I decided that chocolate was a safer option.
I decided to double my usual chocolate sponge recipe to make a four layered cake and then covered that in a chocolate buttercream (700g icing sugar, 400g butter, 100g melted dark chocolate and a dash of milk creamed together). After the buttercream had set I made a chocolate ganache using 250ml of double cream and 250g of dark chocolate (I tend to use Green and Black's). To make the ganache I heated the cream (not until boiling point) and then poured it into a bowl with the chocolate in, gave it a good whisk to combine and melt the chocolate and left to cool. I have to say though that you shouldn't really put the ganache in the fridge to cool as it will loose its shine. I did this as I was short on time, which is why my cake didn't look as beautifully glossy as it should have done.
To finish the cake I added edible gold starts, chocolate curls (which I made using a vegetable peeler and a bar of dark chocolate) and edible glitter.
I hope whoever won the cake enjoyed it! 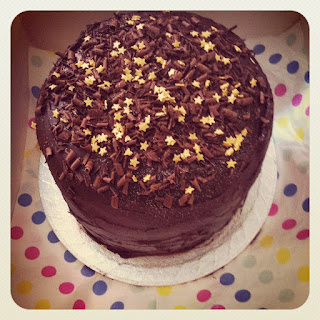 Birthday Afternoon Tea at the Ritz!

Ok so I didn't actually make this but for my birthday I was lucky enough to go the the Ritz hotel in London for afternoon tea. I was so excited and I have to say it totally lived up to my expectations! I don't think I have ever seen so many cakes in my life!
The sandwiches included fillings like hummus and red pepper, cheese and chutney, classic egg and cress and (my favourite) smoked salmon. Cakes included lemon drizzle, chocolate torte, an individual fruit birthday cake and a macaroon/lemon mousse creation (pictured) that was extremely delicious. AND there were scones galore. I could go on all day...
It was the best birthday present I got this year. 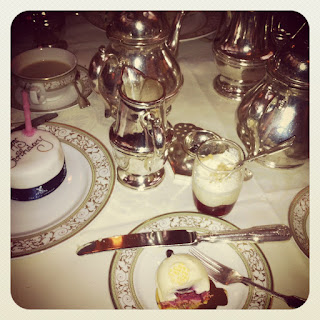 Recently it was one of my favourite auntie's (and my godmother) birthday, and to say thank you for always supporting me in my baking adventures, I decided to make her a cake.
Chocolate Cigarellos are a great way of making any cake look great with minimal effort, but they are quite expensive (costing up to £20 just for enough to make one cake). However, my friend Laura had recently made a cake substituting much cheaper chocolate fingers in place of the cigarellos and the results still looked really good. So I decided to copy her, opting for milk chocolate fingers to go with my raspberry and chocolate chip cake.
I made the cake by adding a couple of hand-fulls of raspberries and 100g of chocolate chips into my usual vanilla sponge mix. I like to slightly crush some of the raspberries with a fork before adding them to the cake. I find this really adds to the flavour and creates a nice texture. When the cake was cool I covered it with a vanilla butter cream (300g of butter, 500g of icing sugar, a teaspoon of vanilla extract and dash of milk creamed together) and lined up the chocolate fingers around the outside (I used around two and a half packets of Cadbury's milk chocolate fingers). I then filled the centre of the cake with raspberries and edible gold stars.
My auntie said it was very yummy! 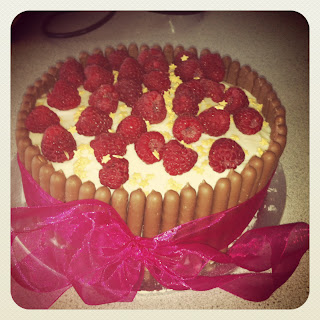 A lovely lady, who works with my mum, asked me to make a tray bake to take to her daughter's wedding. As she told me maple and pecan was her favourite flavour combination, I decided to turn one one my most used layer cake recipes (which incorporates the same flavours) into a tray bake.
To make a maple and pecan cake, you basically want to add about 100g of chopped pecans and 80ml of maple syrup (or to taste) to your usual sponge mixture and bake as normal. Easy peasy.
She also asked if I would top the tray bake slices with pink sugarcraft roses. Sugarcraft is something that I haven't had much practice at, I don't have very steady hands (as I am sure you can tell from all my blurry photos!) and have never been particularly neat in my cake decorating. For these reasons it was never something that appealed to me to try, but I thought I should give it a go anyway.
I decided to order some ready made roses online, incase the ones I made turned out to be awful! I made my roses using pink sugar paste that I got from a company called Squires Kitchen (http://www.squires-shop.com/uk). They were actually very easy to do and didn't take me very long. I used the end of a (very clean and new!) paintbrush to shape the petals and then I moulded them together with the help of a tiny amount of clear alcohol (I used malibu, you should probably use something like vodka though if you need it). 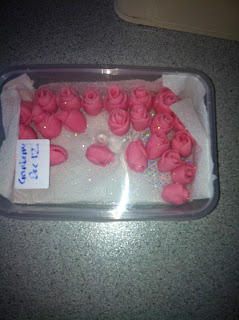 Not bad for a first attempt! 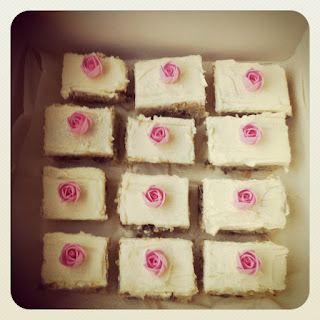 May was a busy month for me baking wise, which was a very good thing but it left me with very little time to write (hence why I haven't posted for a while!). Last week for tea my mum had made some delicious beetroot burgers and to go with them I thought I would make some rye rolls to use as burger buns.
Rye flour is something that I have wanted to experiment with for a while, but have I have only recently got the opportunity (trying to find it in the small town where I live isn't that easy). Rye flour makes a very dense bread, so I decided to mix it with some white bread flour to create lighter buns whilst still keeping the nutty rye flavour.
To make the rolls I mixed 250g of rye flour, 250g of strong white flour, 7g of dried yeast and a teaspoon of salt with about 400ml of water (the amount of water depends on your bread flour, and remember with bread dough 'the wetter the better') and kneaded for about 10 minutes. I then left it for about an hour by the oven, shaped into 8 rolls (makes 8 quite big rolls you could probably get about 10 to 12 smaller ones), left to rise again and then baked in a very hot oven for about 15 minutes.
They were delicious but very filling! 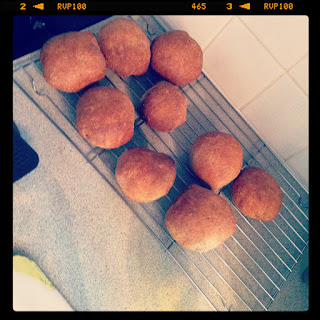